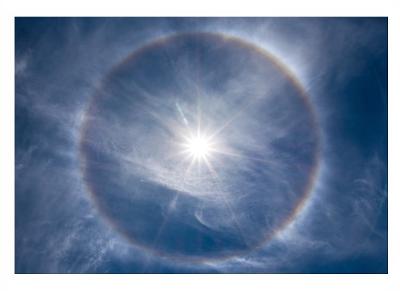 A legend exists, a Cree (inhabitants of the Americas before the arrival of the European settlers)prophecy whereby a time of crisis will occur on the planet and all people will come together in unity, sparked by an awakening, to heal the world. A new Earth will be born. There will be freedom, peace, and justice for all. A balancing of the scales if you will. Those healers, educators and guides will be known as the “Warriors of the Rainbow”, the “Rainbow Children”and the “144,000” mentioned in the“Book of Revelations in the Bible”. These pure souls, committed to God first, and serving humanity, will lead others into a paradigm shift where women and men will place their differences aside, become equals and there will be no more illness, and no more hunger.

According to legend, this time is marked by a ring around the Sun; a “Sunbow” also known as “A 22 Degree Halo” or the “Whirling Rainbow” as depicted in the picture attached. This optical illusion is formed by crystals shaped like hexagons in the atmosphere. This phenomenon has also been explained by the formation of bullet shaped columns.

As a side note, and because I enjoy looking up the root word meanings, the etymology of the word “interference” comes from the Latin root “inter” which also means “between”and “fere” which means “to hit or strike”. There is a need to point out the uncanny resemblance of “fere” and “fear”. At this point, I must draw your attention to two words here, specifically “Corona” and “fear”. It is my belief that we have been in an illusionary state as we have been “hit” with the “Global Pandemic of the Corona Virus” and unfortunately, many have been in fear mode. Crazy how everything connects, huh?

Anyway, back to the legend. To obtain 144,000, one can multiply twelve by twelve. Twelve is a significant number.Jesus had twelve disciples. There are twelve months in a year. We have twelve astrological signs. In numerology, the number 12, becomes a three. Three represents harmony, new life, and a completed cycle. It also correlates with the “Holy Trinity” and “Mind, Body and Soul”. It represents “Wholeness”, a “Complete Circle”, the “Sun” and being “Limitless”.

Applying the same principle, 144,000 = 9. The number nine is a number of perfection. Nine signifies comprehension and a culmination of a cycle. Nine is a sacred number and can also correlate with the“Last Book in the Bible: Revelations”. Many may wish to know that the number nine can mean unity, truth, and oneness. It can also refer to an epiphany, a realization or an “A-HA” moment. Lastly, a nine can mark an ending point in which lessons have been learned.

Now, looking at the number twenty-two as in a “22 Degree Halo” or “22 Degrees from the Sun”, this number is associated with compassion and cooperation. It relates to perseverance and resilience – no coincidence that we have been in a “Collective Trauma with the Corona Virus”. Again, this number, like the number twelve, also represents harmony. However, this number calls people to action. We are being asked to reassess and re-examine where we are and where we want to go. What, if anything, is preventing or interfering with our ability to obtain peace?

Cease the suffering. Mainly, within our own minds. We are more powerful than we may think. It is time to alter the negative programming taking place within. Challenge yourselves, your beliefs, your values, and your thoughts. This is a time of reconnection. This is a time to reinvest in self and others. Begin to feel those feelings that have been suppressed for years. Begin to open-up to a world of logic and intuition. When we utilize both, our reality is less distorted, we take our power back and begin speaking our truth.