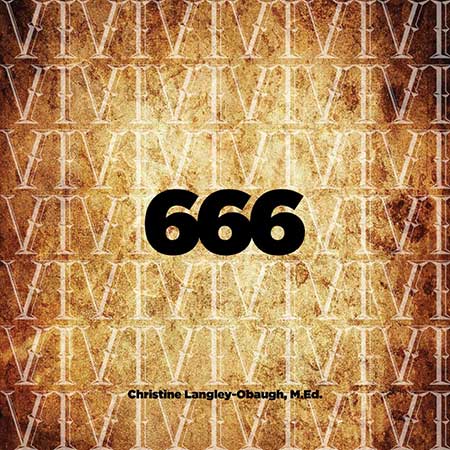 Most people are terrified of the number 666. Not, I.

Interestingly, in numerology, 2022 is deemed a 6 as the sum equals a six.

In Math, the number 6 is known as the first perfect number.Likewise, when we are born, we are also an embodiment of perfection. We are pure of heart without having had society, friends,family,and ourselves interject fears and doubts.The number 6 also relates to authenticity.Our true authentic self.

Sixes are defined by love and healing. Six stands for nurture, balance, stability, unconditional love, support, compassion, and empathy. A six relates to service to others and understanding. One who embodies the characteristics of the number six listens intently, speaks the truth, and stands in integrity.

The number six has also been associated with responsibility. As we go through life, we may become impacted by the opinions of others; we may succumb to co-dependent relationships and remain stagnant in relationships that no longer serve us; we may allow others to make choices for us while we give our power away continually headed in a downward spiral that we may not even recognize.

As polarity exists in all things, to include numbers, there is a negative side to the number 6.The negative characteristics of a six includes one who is passive, one who is perhaps taken advantage of, one who can be easily controlled, and one who participates in constant people-pleasing.Unfortunately, conformity does not nurture the self and, in fact, prevents one from living a fulfilled life. However, most of us fear rejection, therefore, we adopt other’s thoughts and beliefs in order to be accepted.

The negative side of 6 is one who is incomplete, not whole, not holy, and not healed.

In math, if two angles are not congruent, they do not have the same measure.In geometry, two parts are negated and accepted. In human form, we have parts of ourselves that are negative (that we may deem “bad” or “wrong”) but, not accepted. Here, therein, lies the problem.

An inverse function in mathematics, for example, is a function that reverses another function. It takes away the value of the function. Think about that.  How many of us, born pure and of good heart, have been “reversed” by stressors, losses, trauma exposures, life experiences, relationships, friends, family, and society? We may not grasp our true value.

In science, specifically botany, “inverted” is defined as having an attachment in the reverse position of what would normally be considered usual. To apply this concept to human life forms, a negative or undesirable attachment would equate to one who is controlling, narcissistic, materialistic, greedy, deceitful, or manipulative.In other words, one who is inauthentic or one who wears a mask.

A six and nine together form a circle. There is no beginning and no end.  The circle is continuous. The circle represents cycles as “We Repeat What We Don’t Repair”. The circle can also illustrate imprisonment within our mind. Many have been overthinking and ruminating unable to make decisions. The circle is also symbolic of strength and unity, a strong co-creative partnership, working together.“Everything is connected”. The circle embodies the integration of masculine and feminine characteristics within the self, signifying a whole self or healed self. It is through standing in our power and feeling our feelings that this occurs.

The mystery of faith.

The number six is known as an imperfect number, one shy of the spiritual number of seven.

In the Bible, Revelation, 13:11 (which is a 6 in numerology), the beast deceived the inhabitants of the earth. Beast in numerology is a 15 which equals a 6. If we break that down further, the number one relates to leadership, independence, and confidence. The negative side to the number one refers to one who is forceful, controlling, selfish, materialistic, doubtful, and fearful.

A five is a crossroads. It is the number in the middle. It is the number of change. Fives encourage movement outside of one’s comfort zone. A five will ask one to get curious, remain adaptable and flexible, and go after the adventure they long for which will bring them to freedom. The negative side of number five is non-committal, unreliable, lacking focus, inconsistent, and continues to waste a lot of time doing things the way they have always done them.

A fifteen is equivalent to balance.A fifteen, the Beast, represents inner conflicts, negative self-talk, self-doubt, weakness, blindness, and fear. The fifteen, the Beast, is the Devil within our own mind. The positive side of the fifteen, which we achieve when we conquer and overcome the Devil, is a balanced emotional and intuitive state which is then defined as a whole or holy true self.

Have I tackled the Beast? I would answer, yes. Emphatically, yes. Have you?

Christine Langley-Obaugh, Founder of STREST, established in 2013, whereby clients are served and supported as they embark on an introspective journey to reflect, heal, and integrate mind, body, and soul. STREST provides stress, loss, and trauma reduction services without diagnosis through Applied Metapsychology (AMP), Rapid Memory Healing (RMH), Reiki and Mind Strategy. Christine holds a Master’s in Education, Community Agency Counseling, as well as a certificate in Positive Leadership from George Mason University. Ms. Langley-Obaugh is a Certified Mediator with the Supreme Court of Virginia and a Certified Volunteer Administrator. Ms. Langley-Obaugh founded Huckleberry Alliance, Incorporated, a non-profit organization for fatherless teenagers, and is currently working on the research and development of a healing and balancing device through OLIO Enterprises.